How to Use VPR to Manage Threats Prior to NVD Publication

From Vulnerability to NVD CVE 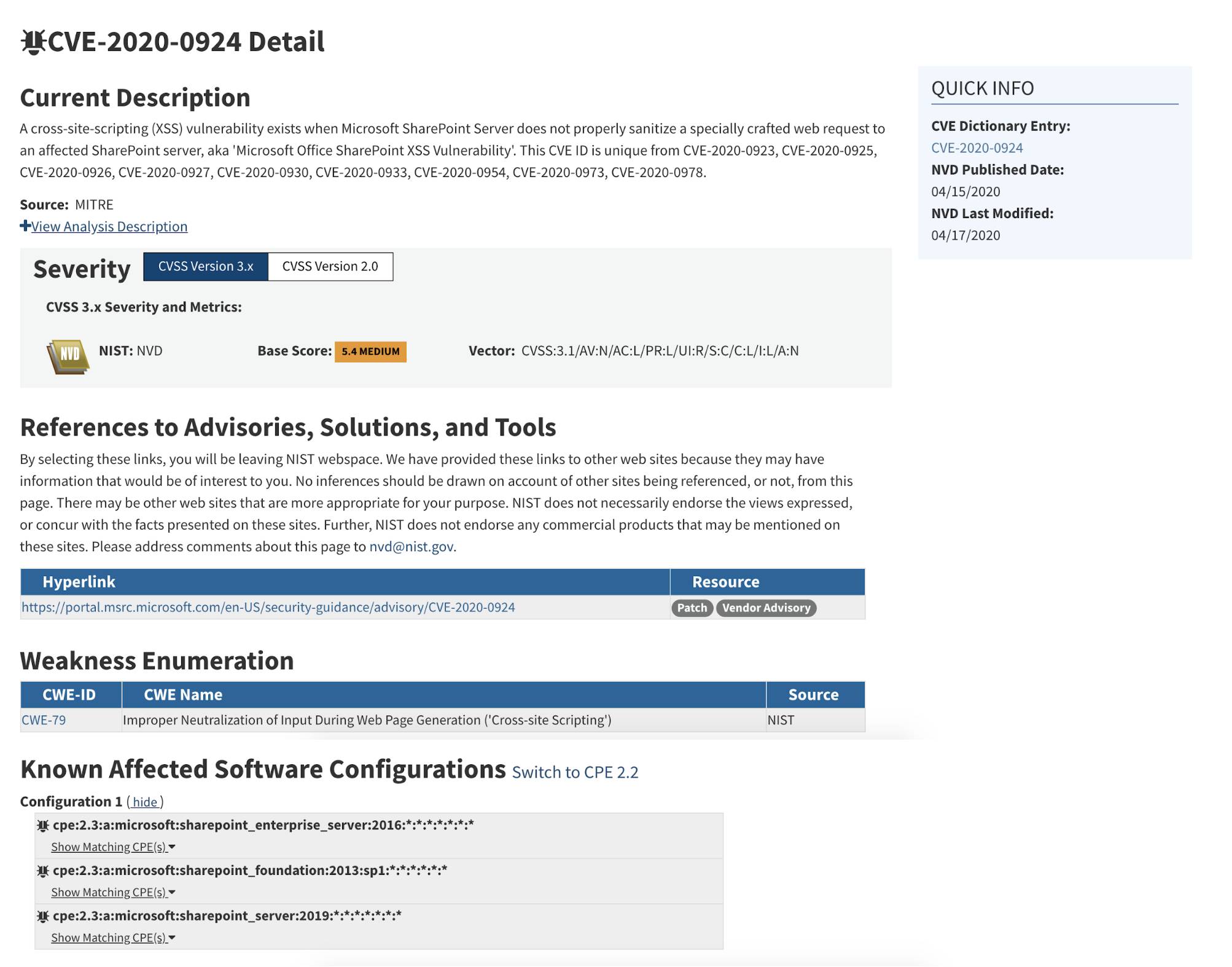 What is a pre-NVD gap?

As a result of the process outlined above, the CVE publication workflow may result in a delay between the initial public disclosure of a vulnerability and its publication on NVD. NVD acknowledges the existence of such a lag and points out that:

The "Date Entry Created" date in a CVE Entry indicates when the CVE ID was issued to a CVE Numbering Authority (CNA) or the CVE Entry published on the CVE List. This date does not indicate when the vulnerability was discovered, shared with the affected vendor, publicly disclosed, or updated in CVE.

In the remainder of this blog post we refer to the time gap between the public disclosure of a vulnerability and its publication on NVD as a pre-NVD gap. Let’s use CVE-2019-17026 as an example to get a more concrete idea of a pre-NVD gap:

Having a pre-NVD gap is not rare for CVEs – 71,000 CVEs are first disclosed in vendor security advisories prior to publication on the NVD, accounting for half of all CVEs. In 2019, 5,300 CVEs had a pre-NVD gap.

Figure 2. Annual number of pre-NVD CVEs broken out by pre-NVD gap size since 2006 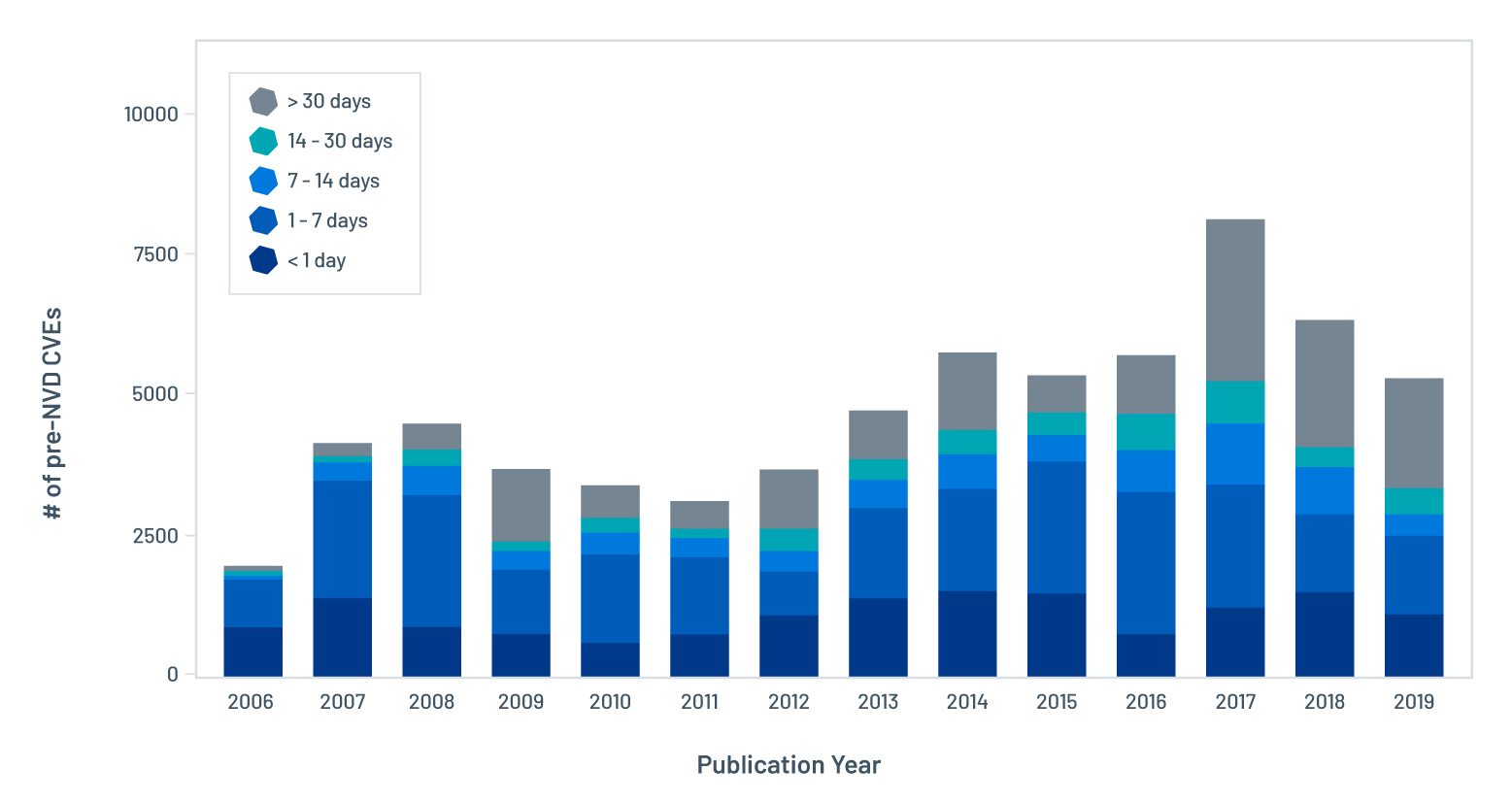 While the pre-NVD gap of some CVEs falls in an acceptable range of one day, our research shows that this gap is much larger for many other vulnerabilities. Figure 2 shows the annual number of pre-NVD CVEs since 2006, broken out by the gap size. Note that the term pre-NVD CVE is used in this blog to refer to CVEs that have been pre-NVD at some point in their lifecycle (and may still be).

This chart tells us several things:

Threat activity prior to NVD publication

Of course, attackers do not wait until a CVE has been published on NVD before they start targeting it for exploitation. If we cross-reference our threat intelligence data with pre-NVD CVEs, we find that 5,400 out of 43,000 CVEs (12%) published between 2017 and 2019 were associated with threat activity prior to NVD publication.

Figure 3 shows a breakdown of these CVEs by publication year and pre-NVD threat window (i.e. days between the first known threat and its publication on NVD). A large proportion of these CVEs were under threat at least 30 days before NVD publication. As a consequence, any systems impacted by these vulnerabilities will be left exposed to threats before vulnerability information has been made available on NVD. 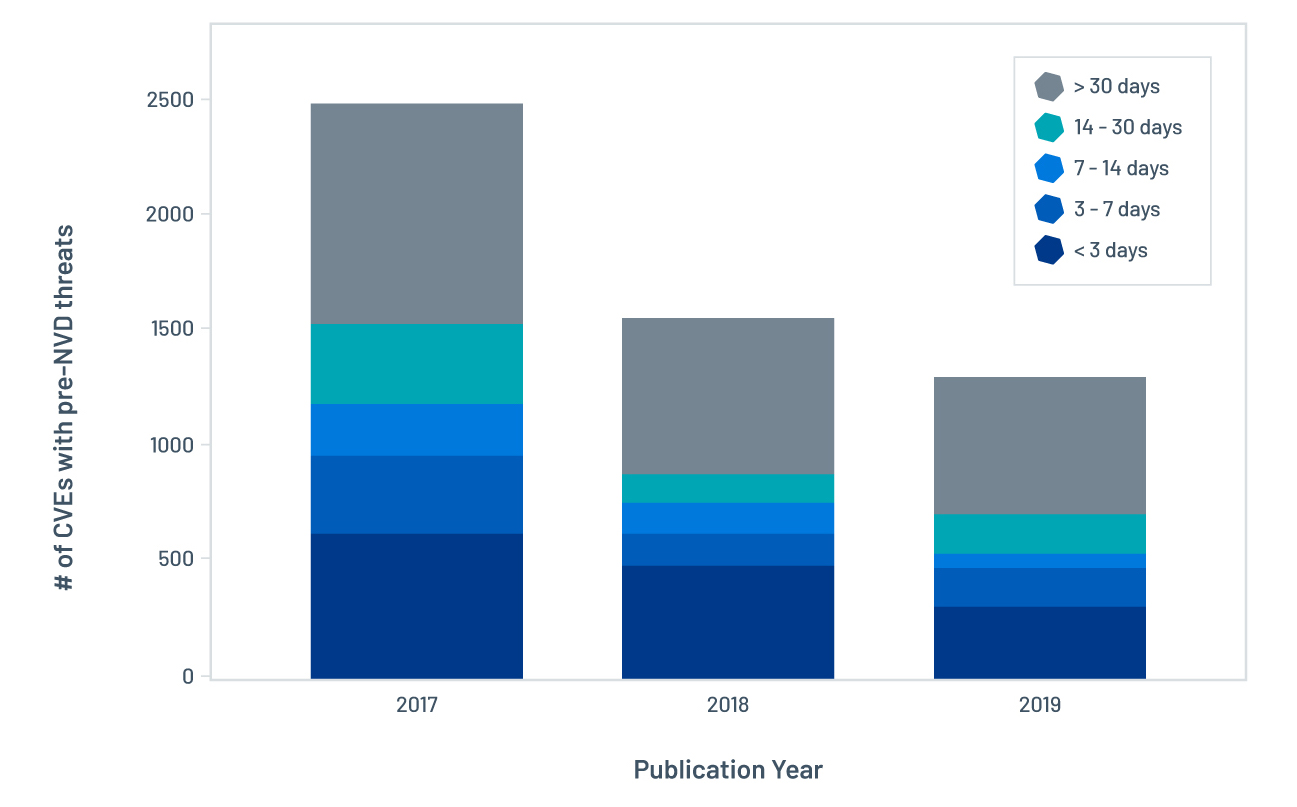 How to prioritize pre-NVD vulnerabilities for remediation using VPR

It is never too early to remediate vulnerabilities under threat. The previous sections show that NVD is not the most responsive source of information for proactively managing vulnerabilities. Tenable addresses this issue by consuming vulnerability data directly from security advisories for 100+ major vendors, and this number is still increasing.

Extending VPR to scoring pre-NVD vulnerabilities is non-trivial. As discussed in the first part of this blog series, VPR is composed of two major parts: impact and threat. Because many CNAs do not provide CVSS metrics to a vulnerability at its pre-NVD stage, the impact score is not always available to VPR. As a result, VPR combines machine learning with natural language processing (NLP) methods to predict CVSS impact metrics from the raw text descriptions of CVEs. This approach will be discussed in more detail in a future blog post.

In August 2019, Tenable announced that pre-NVD vulnerabilities were now being scored by the VPR model. In total, 12,073 vulnerabilities have been published since August 2019 and 1,592 were pre-NVD at some point following public disclosure. Figure 4 compares the VPR gap, i.e. the time between when a CVE was publicly disclosed and a VPR was assigned, with the pre-NVD gap. VPR is, in general, more responsive than NVD on scoring new vulnerabilities. For example: 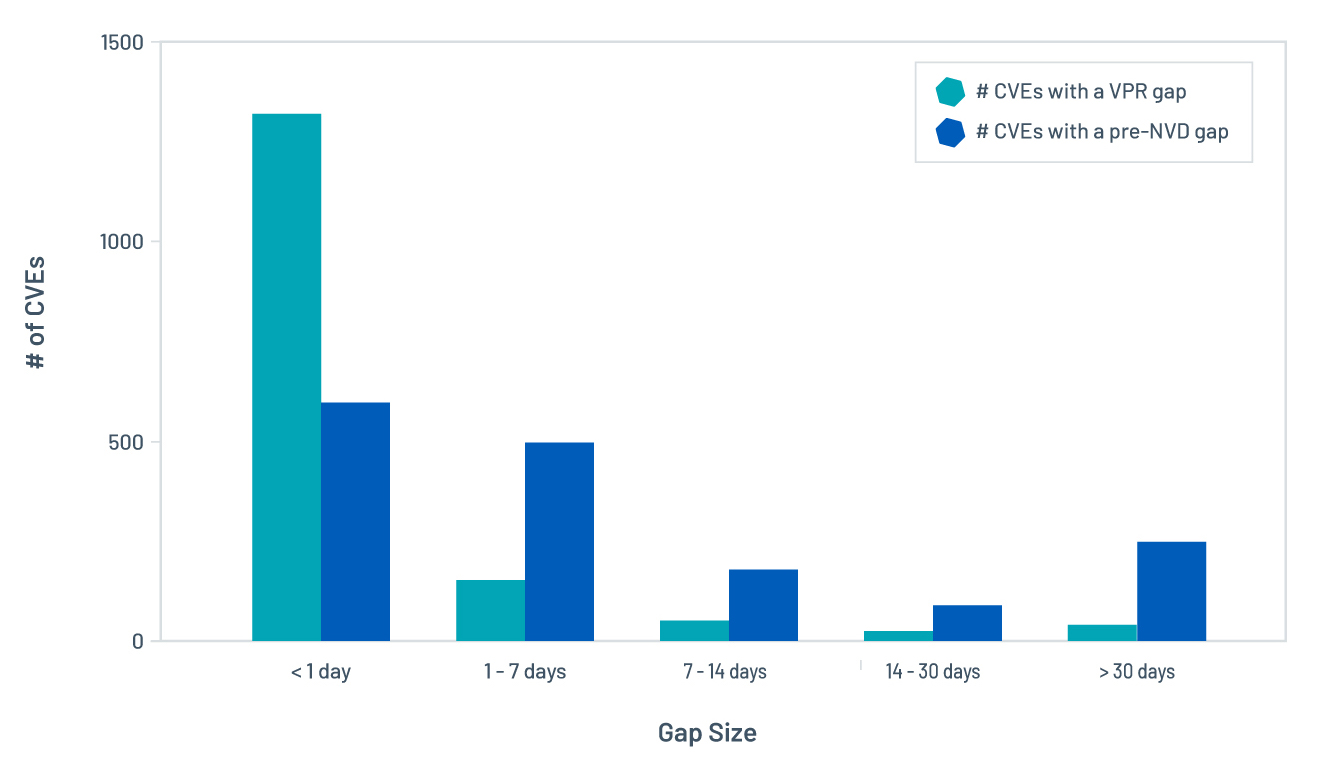 Figure 5 shows the distribution of VPR scores assigned to the 1,592 pre-NVD CVEs during their pre-NVD stage. We see that 98 are rated as VPR Critical, 83 of which were associated with pre-NVD threats. This means VPR gives organizations the opportunity to reduce their attack surface by remediating newly disclosed vulnerabilities that are being targeted in the wild. The proportion of vulnerabilities associated with pre-NVD threats increases in line with the VPR criticality levels — 85% of the VPR Critical vulnerabilities are related to pre-NVD threats, 50% to VPR High and 25% to VPR Medium. This is in line with what was covered in the first part of this blog series.

Figure 5. VPR score distribution for the 1,592 vulnerabilities in the pre-NVD stage 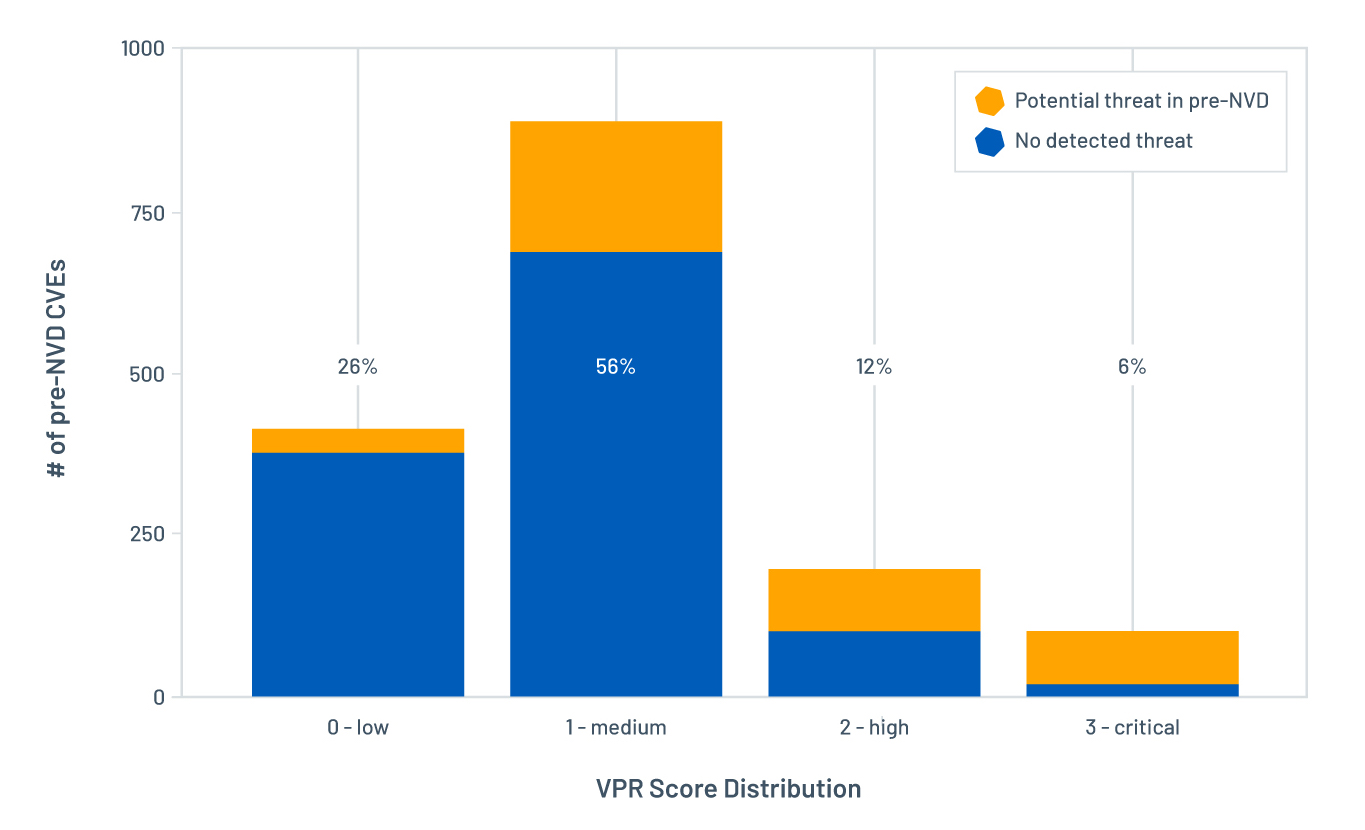 This section uses CVE-2019-17026 as an example to illustrate how VPR can be leveraged for pre-NVD vulnerabilities. Let’s look at the event timeline:

In this blog, we have shown that it is not uncommon for a vulnerability to be targeted by threat actors prior to publication on NVD. Given the publication delays that can occur, security practitioners need to be cautious about using NVD as a single source of truth for vulnerability information. We showed that VPR rates new vulnerabilities in a timely manner – 84% of new vulnerabilities are scored by VPR within one day of public disclosure and 93% are scored within the first week. We also demonstrated how VPR can be leveraged to reduce the attack surface by remediating pre-NVD vulnerabilities under active exploitation.

This is the third installment in our three-part series exploring how to use Tenable products to protect credentials used for network assessments. Here, we focus on ’nix style systems: Linux, Unix and ...

This is the second installment in our three-part series exploring how to use Tenable products to protect credentials used for network assessments. Here, we provide specific guidance for Microsoft Wind...

How VPR Helped Prioritize the Most Dangerous CVEs in 2019

How do VPR and CVSS compare when assessing the most dangerous CVEs in 2019? Let’s find out. Two weeks ago, we kicked off a blog series on vulnerability priority rating (VPR), with a post focused on t...