Zoho releases a patch for a critical remote code execution flaw in ManageEngine one day after the vulnerability was publicly disclosed.

Update 03/09/2020: Updated the Analysis section to include information on reports of active exploitation of this vulnerability.

On March 5, Steven Seeley, an information security specialist at Source Incite, published an advisory for a vulnerability in Zoho ManageEngine Desktop Central. Desktop Central is a centralized management solution for a variety of devices – from personal computers (e.g., desktops, laptops) to mobile devices (e.g., smartphones, tablets). The vulnerability affects Desktop Central build 10.0.473 and below.

CVE-2020-10189 is an untrusted deserialization vulnerability in Zoho ManageEngine Desktop Central. The vulnerability stems from an improper input validation in the FileStorage class. According to Seeley, an unauthenticated, remote attacker can abuse the lack of validation in the FileStorage class to upload a malicious file containing a serialized payload onto the vulnerable Desktop Central host. To trigger the untrusted deserialization, an attacker would then need to make a subsequent request for the file uploaded onto the vulnerable host. This would then grant the attacker arbitrary code execution with SYSTEM/root privileges. For more detail, please refer to the proof-of-concept section, which contains Seeley’s detailed breakdown of the vulnerability.

According to a Shodan search by Nate Warfield, senior security program manager at Microsoft, there are over 2,300 publicly accessible Desktop Central instances. 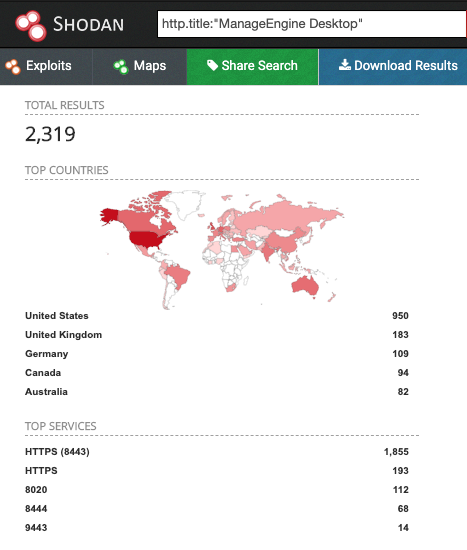 On March 9, we became aware of reports this vulnerability is now being actively exploited in the wild, including a list of indicators of compromise.

Along with his advisory, Seeley published a proof-of-concept (PoC) for the vulnerability, which he shared in a tweet.

Zoho released a patch on March 6 to address this vulnerability in Desktop Central build 10.0.479. Users are strongly encouraged to patch as soon as possible by visiting ManageEngine’s service pack release page. The page also includes a link to download build 10.0.479.

A list of Tenable plugins to identify this vulnerability will appear here as they’re released.

Topics that are top of mind for the week ending July 1 | Cybersecurity budgeting priorities. All you ever wanted to know about ransomware. CISOs weigh best-of-breed vs. platforms. The epidemic of identity-related breaches. And much more!

New information and technical details, including a proof-of-concept have been published for a remote code execution flaw in Zoho ManageEngine ADAudit Plus that was patched last month.

The latest research from Forescout’s Vedere Labs explores the state of risk management in operational technology through the lens of 56 insecure-by-design vulnerabilities.